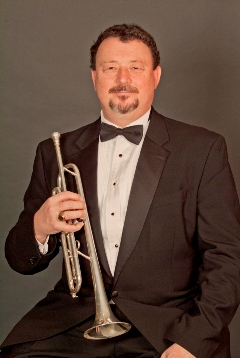 David C. Allison, Director of Bands, earned a Masters degree in Music Performance from the University of South Carolina after undergraduate studies at Ithaca College and at the Eastman School of Music.  As a trumpet player, he maintains a busy freelance schedule in both the classical and commercial fields performing in shows, recording sessions, clinics, and teaching. He has performed with many orchestras in New York, Kansas, Oklahoma, South Carolina, and Georgia. Currently he is Principal Trumpet Emeritus after performing 25 years as Principal Trumpet with the SCPO. He is a founding member and solo trumpet of the Palmetto Brass and performs with the Dick Goodwin Big Band and the Palmetto Concert Band. A prize winning soloist, Mr. Allison has appeared as guest soloist with the Savannah Symphony, the South Carolina Philharmonic, the University of South Carolina Symphony, and the S.C. Chamber Orchestra. His commercial credits include engagements with such groups as the Glenn Miller Orchestra, the Temptations, Natalie Cole, Henry Mancini, Ray Charles, Aretha Franklin, Olivia Newton John, Rich Little, Doc Severinsen, Dizzy Gillespie, Chuck Mangione, The Four Tops, The Drifters, Bob Hope, and Paul Anka.  As an educator, he has taught in public schools, privately, and at the college level.  Currently he is in his tenth year as Director of Bands at Spring Valley High School, after nineteen years as Director of Bands at Summit Parkway Middle School.  He has taught in public schools, privately, and at the college level.

With the help of Spring Valley’s faculty and administration, Mr. Allison has worked to allow opportunities for students to continue in the Spring Valley Band programs while concentrating on their rigorous academic courses.  He has also worked to create and implement state standards for instrumental music curriculum at the district and state level.

As Director of Bands at Summit Parkway from January 1994- 2012, the Summit Parkway Bands earned superior ratings at SCBDA’s Concert Festival for 17 consecutive years; they have earned superior ratings at Carowinds, the Orlando Festival of Music, the All-Star Music Festival in Orlando, FL, the All-American Festival in Orlando, the Grand National Adjudicators Invitational, and the Dixie Classic Festival in Atlanta, GA. At Grand NAI, the ensemble received top honors among middle school bands in 2000, 2002 and 2005.

Summit Parkway earned the SCBDA Outstanding Performance Award for 17 consecutive years.  In 2001, the Summit Parkway Honor Band performed at the South Carolina Music Educators Association In-Service Conference in Greenville, SC. In 2002, they performed at the MENC National Biennial In-Service Conference in Nashville and also at the Midwest International Band and Orchestra Clinic in Chicago.  In April 2001, the Summit Parkway Jazz Band was featured at Vh-1 Save the Music inaugural event on the steps of the South Carolina State House in Columbia. In November 2002, the Honor Band was asked to perform for President Bush upon his arrival in Columbia. In February 2007, the Honor Band performed at the Southern Division MENC Convention in Charleston, SC.

Mr. Allison was awarded the 1998-99 Summit Parkway Teacher of the Year, and is the 2016-2017 Spring Valley High School Teacher of the Year. He was named in School Band & Orchestra magazine’s Fifty Teachers Who Make a Difference in 2001, and was awarded the Citation of Excellence by the National Bandmasters Association in 2001, 2002, 2007, 2011 and 2014. Mr. Allison has conducted numerous band and orchestra clinics, and has authored articles on trumpet pedagogy for publications including the South Carolina Bandmaster. In May 2003, he was a featured presenter at the Iowa Bandmasters Clinic; in February 2003, he was guest conductor of the Ridge View High School Band’s performance at the University of Southern Mississippi Band Clinic, and in March 2005, was guest conductor of the Ridge View Band at the Bands of America National Concert Festival. Mr. Allison has been a guest clinician and the conductor for several Region, All-County, and All- State Band performances in several states. In March of 2016, Mr Allison had the honor of being named the Outstanding Bandmaster by Phi Beta Mu, International School Bandmaster Fraternity.

Mr. Allison has earned National Board Certification, and re-certification in Early Adolescence through Young Adulthood/Music.  He maintains professional affiliations with the SCBDA, MENC, NBA, ITG and Phi Beta Mu. The Buffet-Crampon Company has named Mr. Allison a Trumpet Artist/Clinician for Besson/ B&S Trumpets.

Mr. Allison receiving news of his award with the SV Concert Band